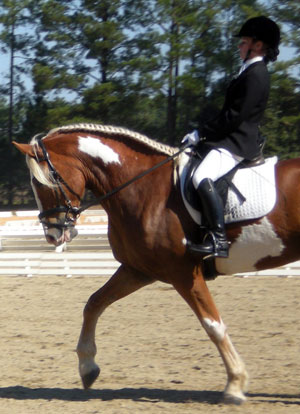 A few shots of Willa last weekend at the Carolina Horse Park show. We are working on our first level work and she is doing great. The shots show what I call her “power trot” and then her lengthening trot. We are scoring from 60% to 67% at First Level 3 and having a great time. She is healthy and happy in NC! 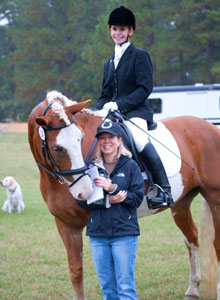 Amy Allen re: Willamena (Belgian x Paint) dressage
Thought you would like to know that Willamena’s first level debut was last Saturday at the recognized Pinehurst Fall Dressage show. Willa and I won the First Level One open class with a 69% and captured the Adult Amateur high score of the show!! Willa has many fans!!

Willa and I have had a great fall – in and out of the show arena! We worked hard to bring our Training 4 test to the Fall Pinehurst Recognized show and succeeded in winning a very competitive class in front of a senior “S” judge from Arizona. We also received a 69.2% second place at Training 4 at a recent schooling show. The winning horse, a German import – for sale for $80,000! – beat us by only .4%. The judge gave Willa an “8” on gaits! And an 8 on the elusive stretching circle! 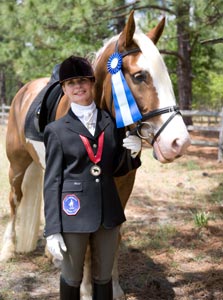 Congratulations! to Amy Crandell of N.C. and Willamena on their debut in recognized dressage competition. They were second, with a score of 68% in early May of 06. Competing against both seasoned horses and German bred warmbloods, they brought home a high ribbon and tons of compliments on this very beautiful and talented mare. Just coming five, Willa exemplifies our horses – beautiful, talented and quiet! Well Done Amy & Willa, we are impressed and proud!

Amy Crandall of North Carolina and Willa, her lovely Belgian x Paint mare just keep proving that a Dundulk Draft Cross is very competitive with warmbloods in the dressage ring. At a recognized show at Pinehurst, NC, at the beginning of October, Amy and Willa took a blue with a score of 68% at Training Level Test 1 giving them1st place! She reports

“our closest competitor earned a 59% and we also took a 70% at Training Level Test 2 second place – the winner beat us by .368 of a percent!” This was her second recognized dressage show and her first time “overnighting” at a show grounds. She was a perfect lady! Willa continues to wow spectators and judges alike . . . I must add that it was my first time scoring a 70% at a recognized show, not to mention winning a class! so it was very much a big weekend for us both. Our partnership has really progressed since our May show. Willa is such a sweetheart and has such presence. I do have to remind myself I’ve only had her 1 year, 3 months.”

Amy bought Willa as a green 4 yo and is doing a tremendous job with her. Congratulations to a lovely rider and her lovely horse.

Congratulationsto Amy Crandall Allen and Williamena in N.C. on their continued wins at recognized dressage shows!A Willamena update! Spring recognized show in Pinehurst: 69% and a win (in front of a very strict German judge)

Willa has also helped me earn a USDF Rider Certification at Training Level (see patch on my jacket). We are ready to start first level work as we’ve accomplished our basics at Training Level. She continues to be a whole lot of fun and everyone asks (and is surprised) about her breeding.

Congratulations to Amy (Crandall) Allen and Willamena (Paint x Belgian) who, at a recent dressage show won both their classes – Training 1 and 2 and ended up with the high scores of the day! Then followed it up the next weekend with a win at a recognized show over 11 riders, 4 of which were professionals! We are very impressed with this pair.