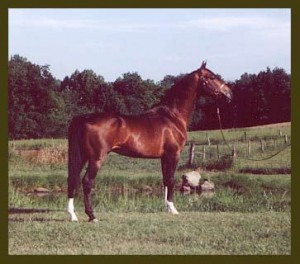 You will note that some of our draft crosses contain Hackney blood. The Hackney Horse is considered a “rare breed” in the United States by the AHSA and are indeed, hard to find, so most people are not familiar with them. The Hackney is a foundation bloodline for many European warmbloods such as the Trakehner, Holsteiner and Dutch Warmblood. The Hackney horse, while bred originally as a driving horse, exhibits a conformation that allows them to elevate their shoulders, collect and drive with their haunches. Just what we need for dressage and jumping! In fact, the world high jump record of 8′ 2″ is held by a Hackney cross bred, Sir Ashton (later called Greatheart). Many, many jumpers in the 30s and 40s were cross or full bred Hackneys including Tosca, a Gold Medallist for the German Olympic Team of 1936. Long time Hackney breeders will tell you that the Hackney is a phenomenally intelligent animal, that they think before they react.

We like a draft crossed with a Hackney as opposed to a TB. You get a horse with phenomenal self carriage, the ability to elevate their shoulders and reach (whether reaching over a fence or in an extended trot) and collect on their haunches. The Hackney was bred to go a distance, bringing endurance into the picture. Thoroughbreds, bred for racing, tend to be more “downhill” and built with a lower set neck, the better to flatten out at a gallop.

What our Horses are not

We do not sell PMU horses. We are adamantly opposed to the industry. Without climbing on a soapbox here, let me just say that PMU ranching benefits drug companies first and foremost – not the ranchers, not the people buying the horses and certainly not the horses. They can put any spin on it they want (and what a wonderful spin it is – look at the MFHA publication Covertside to see their expensive, flashy ad campaign for the CanAm SportHorse) but the fact remains that mares are kept standing tied for the majority of their gestation. Are the facilities clean? Yes, mostly. Are the horses fed well? Yes. Is it a humane way to keep a horse? It is my considered opinion that it is not. The very nature of the horse is to be free and this confinement goes on year after year of the mare’s life. As someone who makes her living off of the horse I can’t, in good conscious, overlook this. Sure, it’s a cheap supply of horses, but child labor produces cheap clothing too. Do we close our eyes to its origin because it’s cheap?

I am also a supporter of the small farmer – being one myself. The breeders we buy from raise a few horses, raise a few cows, raise a few crops – they are not huge “factory farms” like the PMU ranches or the concentrated feeding operations for swine, chicken or turkey. They have bloodlines going back generations, they can talk about a mare their father, or grandfather had and the traits it has passed on to succeeding generations. There is something. . .right about that. I will give my support to the small breeder everytime. Everybody wants a deal – everybody want a cheap horse I know, but in the overall scheme of things, the money you pay for the horse is such a small portion of what you will spend over the time you own it, it’s not a significant a percentage. So, the next time you hear about, or see an ad for CanAm sport horses or the NAERIC (North American Equine Ranching Information Council), think about the origins of these horses.